Helps the driver to avoid skidding and improves the car’s traction. A pulsing sound may be noticed during braking or acceleration when the system is in action. The car may accelerate slower than expected when the accelerator pedal is depressed.

Active Yaw Control. The function limits the driving and brake force of the wheels individually in order to stabilise the car.

Spin Control. The function prevents the driving wheels from spinning against the road surface during acceleration.

Traction control system. The function is active at low speed and transfers power from the driving wheel that is spinning to the one that is not. 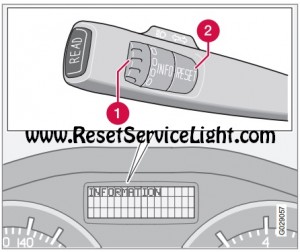 Suppressing system function may alter the driving characteristics of the car.

DSTC ON is shown for several seconds on the display each time the engine is started.

Messages on the information display.

TRACTION CONTROL TEMPORARILY OFF means that the system has been temporarily reduced due to excessive brake temperature.

ANTI-SKID SERVICE REQUIRED system disabled due to a fault.

Symbols in the combined instrument panel. 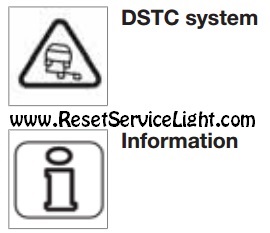 are displayed at the same time: Read the message on the information display. If the symbol

appears alone then it may appear as follows: