It is a device able to support the driver, with electronic control, which allows driving at speed over 30 km/h on long and straight dry roads (e.g.: motorways), at a desired speed, without pressing the accelerator pedal. Therefore it is not suggested to use this device on extra-urban roads with traffic. Do not use it in town.

The Cruise Control cannot be engaged in first or reverse gear. It is advisable to engage it in 4th or higher gears.

Travelling downhill with the device engaged, the car speed may increase more than the memorised one.

When the device is activated the warning light

turns on together with the relevant message on the instrument panel (for versions/markets, where provided). 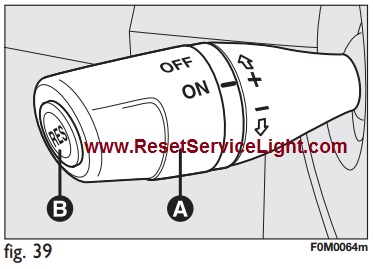 If the device has been disengaged for example pressing the brake or clutch pedal, the memorised speed can be reset as follows:

The speed memorised can be increased in two ways:

The speed memorised can be increased in two ways:

The device can be disengaged in the following ways:

The device is automatically deactivated in one of the following cases:

When travelling with the device on, never set the gearshift lever to neutral.

In the event of device malfunction or failure, turn knob A to OFF and contact a Abarth Dealership.

All information how to reset the memorised speed is taken from Fiat Grande Punto owners manual.