Do it yourself, replace the tailgate handle on your Dodge Ram. The repair procedure shown below could be similar to models manufactured between the years 2002 and 2008. To be able to make this particular repair, you will require a T30 torx driver and an 8 mm socket wrench. The process is quite simple, it should not take you more than 20 minutes.

In the beginning, you should locate in your trunk, the eight torx screws (shown in the picture below) that hold the plastic cover of the tailgate. You can unscrew them using a T30 torx driver. 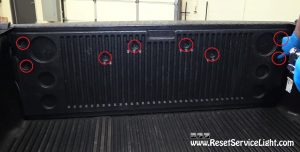 On some models, there is only a metal backplate behind the tailgate, but the position of the screws should be the same, nevertheless. After you remove the cover, you will have access to the latch and the handle of the tailgate. In order to remove it, unscrew the two 8 mm nuts that hold it, shown in the image below, using the socket wrench. 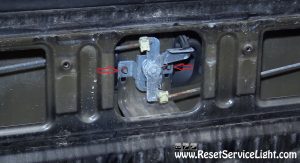 With the nuts removed, pull down on the bottom of the latch and slide the handle out from the tailgate. At this moment, you can install the replacement. Position the new handle properly and secure it with the two 8 mm nuts. Check the latch if operates properly before installing the cover of the tailgate and if everything works OK, finish the repair. This is all you need to know, if you have to change the tailgate handle on your Dodge Ram made between the years 2002 and 2008.