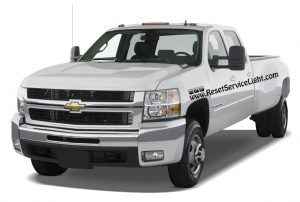 After opening the driver’s door and popping-up the hood of your car, you will have to remove the air box (the plastic box where the air filter is located), in order to gain access to the headlight bulb on the passenger’s side. There are four torx bolts and a metal collar that hold it and you will have to remove them. We marked the position of the screws with red arrows in the next picture. To loosen the collar you can use a Phillips screwdriver and the T 25 torx for the other screws. 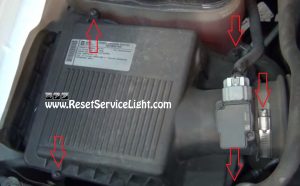 After you do it, you will be able to detach the cover. You will get access to the air filter. Remove it, and then, detach also the bottom part of the air box, by pulling the piece up, towards you (see the image below). It is held by three plastic pins/rivets and it will come out quite easily. 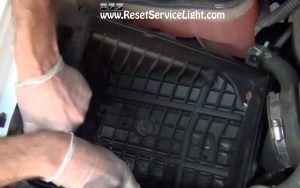 At this point, you will get access to the light bulb. You can service it by turning its socket counterclockwise (see the picture below). 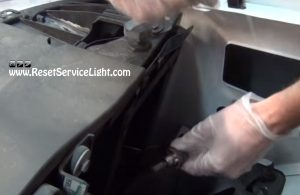 Now, your repair is done. You have to put everything back correctly. Make sure you have reinstalled the bottom part of the air box, the air filter and the upper cover. This is everything you need to do, in order to service the headlight bulb on the passenger’s side on Chevrolet Silverado 2006-2013.