Do it yourself, replace the ignition coils on your Ford Explorer V8 4.6L, manufactured in the year 2006. The procedure is similar on models produced in 2007 and 2008. You will need new ignition coils from your local auto parts shop, an 8 mm socket wrench with an extension and some dielectric grease. The repair process is easy and it will take about 45 minutes if you wish to change all the coils. 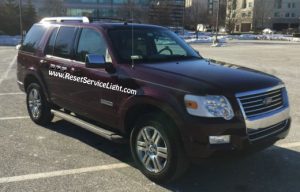 At the beginning, open the hood of your car and go to the battery. We advise you to disconnect the negative terminal cable to avoid errors on the computer, shortcuts or electrical damage on other components. Go to the engine and locate the ignition coils. There are four coils on each side of the engine and the replacement procedure is the same for each one. First of all, unplug the harnesses of each coil by pressing the little safety plastic tab (as shown in the next image). Then, remove the 8 mm bolts that hold each coil, using the socket wrench. You will find it easier to unscrew the bolts using an extension to your wrench. 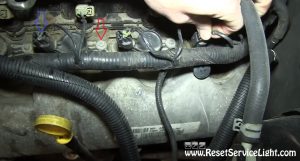 Remove the four coils on the driver’s side and then move to the other four on the passenger’s side. Install the replacements, using before that a little bit of dielectric grease placed just inside the tip of the coil, as marked below. Install everything back carefully and do not forget to reconnect the battery at the end. This is all you need to do if you want to change the ignition coils on your Ford Explorer V8 4.6L, manufactured in the year 2006. 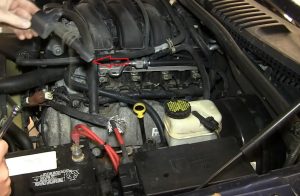