Do it yourself, remove the front door panel on your Dodge Stratus, produced between the years 2001 and 2006. The procedure requires a flat blade screwdriver, a Phillips screwdriver and a putty knife. Removing and reinstalling the door panel will probably take you more than half an hour.

Open the driver’s door and start by prying the triangle cover behind the side mirror. You can do that very simply, by hand. After that, using the tip of a flat headed screwdriver, pry out two small covers that hide Phillips screws, one behind the door handle an the other at the bottom of the door pull. Then, using the Phillips screwdriver, remove those screws and four others located on the edges of the door panel, as you can see in the images below. 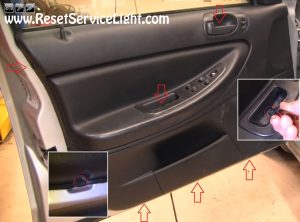 Once you remove the fasteners, use a putty knife to detach the door panel from the door frame. Start to use it from one of the edges, make some room between the panel and the door and then insert your fingers to pull out the panel easily. After you manage to release the panel from its pins, you will have to get behind it and remove the rod of the door handle and two electrical harnesses, one powering the door lock and the other one the window switch (see picture below). 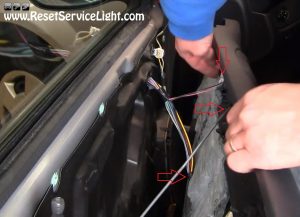 At this point, you can remove the door panel. Make the repairs needed and reinstall it reversing the steps above. This is all you need to do, if you wish to remove and reinstall the front door panel on your Dodge Stratus, made between the years 2001 and 2006.