Do it yourself, remove the front door panel of your Chevy HHR, the model produced in the years 2006, 2007, 2008, 2009 and 2010. We show you below a step by step tutorial for the door panel on the passenger’s, front side. The only tools you’ll need are a flat blade screwdriver, a T30 torx driver and a putty knife. No matter the repairs you wish to make, the removal and reinstalling procedure will take you about one hour.

In the beginning, you will have to pry out two small covers that hide retaining screws. One is located in the arm rest pull cup. It’s a small rubber cover that can be removed by hand. The other one is behind the door handle and can be pried out using the tip of a flat headed screwdriver (see images below).

Behind these covers, as we said before, you will find three T30 screws, as you can see in the pictures below. Remove them using an appropriate screwdriver. On the right edge of the door panel, to the exterior, you will also have to remove a small clip, that secure the panel furthermore. 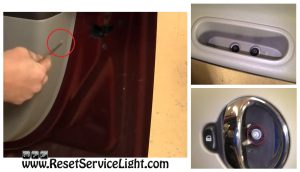 After you get rid of these retainers, you can use a putty knife or a door panel clip tool and pry out on the edges. Do it firmly, until the panel gets out of its clips, lift it and detach it form the door frame. Behind it, you will have to remove the cable for the door handle and the harness powering the small door lock button. 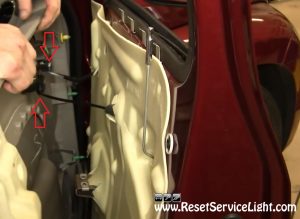 After that you will be able to remove the door panel completely. Make the repairs needed and install it back, or a replacement, reversing the steps above. This is all you need to do if you plan to remove and replace the front door panel on your Chevy HHR, the model made between 2006 and 2010.