DIY, remove the front bumper of your Honda Accord, the model produced between the years 1998 and 2002. For this repair you will require a flat headed screwdriver and 8 and 10 mm socket wrenches, with extensions. Removing and replacing the bumper will probably take you more than half an hour.

In the beginning, you might wanna jack stand your car on the front, on both sides, in order to have better access to the bumper’s fasteners. But this is only optional, not required. You will have to remove two bolts on each side of the car, near the wheels, as you can see in the picture below. On the upper side you will have an 8 mm bolt and underneath, a 10 mm one. Turn the wheel to the interior of the car, remove the bolts and move to the next one. 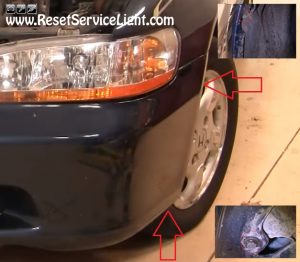 After you deal with the bolts, you will have to remove the six plastic clips located all around the bumper. There are two of them on the upper side, near the headlights and four beneath, as you can see in the image below. They can be removed very easily with a flat blade screwdriver. 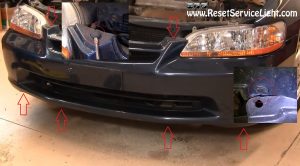 At this time you can pull out the bumper and make the desired repairs or replace it with a new one. To reinstall correctly, you just have to reverse the steps above. This is all you need to do, in order to remove by yourself the front bumper on Honda Accord, made between the years 1998 and 2002.