This is how you can change the tail light assembly on your Cadillac CTS. The repair process we show you should be similar on CTS models made in the years 2003, 2004, 2005, 2006 and 2007. In order to make this replacement you will need a 10 mm wrench, or a socket with a ratchet.

The procedure will probably take you less than half an hour and starts into the trunk. Here you will have to remove the spare tire cover first, by twisting the wheel-like retainer shown in the picture below. This will release the insulation above the spare tire. Then you will have to move away the plastic panel to the rear of the trunk, by twisting another four plastic retainers located at each of its both extremities (see the small images below). Now pull that rear trim panel out and go next to the tail light you need to replace and remove a fifth plastic retainer, located to the exterior side of the trunk. It holds a piece of insulation, that you also need to move away. 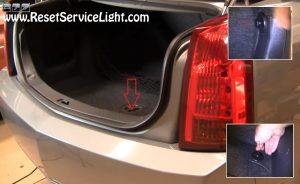 By doing that, you will gain access behind the tail light, where you will find two bolts, secured by 10 mm nuts, as you can see in the picture below. Remove them with a wrench, unplug the harness powering the assembly and pull out the lens. 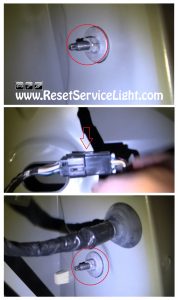 At this point you can replace the entire tail light. You might need to transfer the bulbs from the old one to the new one and you can do it very simply by twisting their sockets counterclockwise. Make the replacements needed and install the new lens reversing the steps above. This is all you need to do, if you plan to remove and replace the tail light assembly on your Cadillac CTS, the model produced between the years 2003 and 2007.