At the beginning of the repair you need to pry out the triangle-shaped plastic cover on the door, by inserting your fingers, a flat blade screwdriver or a prying tool behind it, as shown in the next picture. 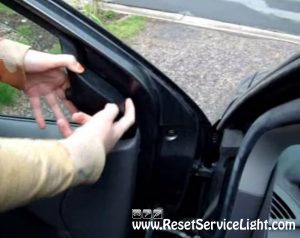 Pull the piece towards you until the plastic hook behind it pops up, uncovering an electrical connector (marked below with a red arrow) and behind it, a 10 mm bolt (located in the whole marked with the blue arrow). Unplug that harness and remove the bolt using the socket wrench. Pay attention when you unscrew this bolt, because it can fall down into the door panel. The last step is to remove the screw pointed by the yellow arrow in the next image, using the T20 torx driver. 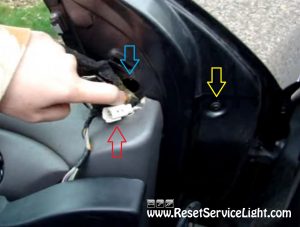 Be careful, because at this point, the mirror has no fasteners to secure it and it might fall down. You can now install the replacement mirror and reverse the repairing process. Connect back the harness and tighten the screws (do not over tight them, as you might break the mirror assembly). Do not forget about the triangle cover on the door. Install it back and you are done. This is all you have to do in order to change the left side mirror on your Ford Focus made between the years 2002 and 2007.