DIY, change the headlight on your Dodge Stratus, the model made between 2001 and 2006. This replacement can be done in about half an hour, using a 7 mm wrench or a socket with a ratchet and a flat blade screwdriver.

First, open the hood of the car and, using the tip of a flat headed screwdriver, remove three plastic pins that secure the front bumper next to the headlight you need to replace. This will help you to make more room to maneuver the headlight when you remove it and install it back. Pull out the middle of the pins first and then pull them out completely, as you can see in the picture below. 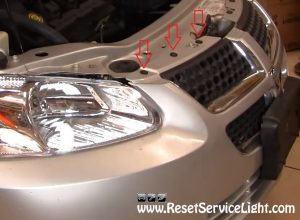 After you do that, you can go above the headlight and remove the two 7 mm bolts that secure it. These are long bolts that can be removed a lot easier with a socket. You will be able to do it without problems, using a simple wrench, but it will just take a lot longer. 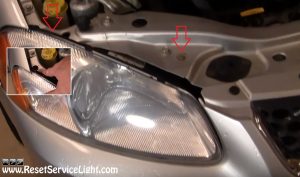 At this point you can simply pull out the assembly from the body of the car. It has a guiding pin to the exterior of the car. Pull on that first, detach the assembly and remove the bulbs from behind, to be able to replace the entire headlight with a new one (see picture below). 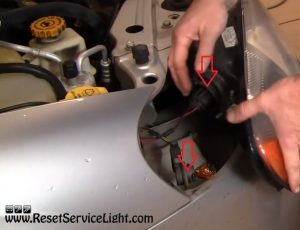 The main light bulb has a securing ring that has to be removed first and the turn signal light bulb can be pulled out of its socket after you twist it counterclockwise. Install the new headlight reversing these steps, secure it with the bolts above and reinstall those pins into the front bumper. If you need to adjust the new lens, you can do it using a Phillips screwdriver, from two adjusters located above the assembly. This is all you have to do, if you wish to remove and replace the headlight assembly on your Dodge Stratus, the model made between the years 2001 and 2006.