Do it yourself, change the front turn signal light assembly on your Toyota Camry, the model made in the year 2004. The replacement process is the same on any 1992 to 1994 Camry. This particular replacement will take you less than 15 minutes, if you follow the simple steps presented below and it will only require a Phillips screwdriver.

In the beginning, using the Phillips screwdriver, you will have to remove the screw shown in the picture below, that holds the exterior half part of the turn signal light. 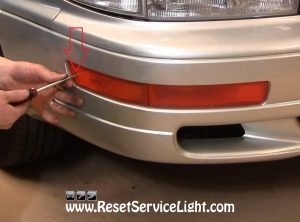 After you deal with this screw, you can pull out this part of the turn signal. You might need to use a flat headed screwdriver to gently pry out the lens, once you removed that screw. So, after you detach the lens and unplug the electrical harness behind it, you will come across a second Phillips screw, as you can see below. Undo this one too, because it holds the right, main part of the turn signal light. 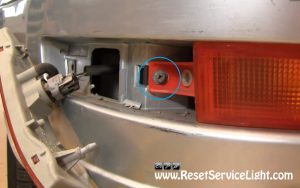 Now you can detach this part of the assembly too, by pulling it out, to the left extremity of the bumper. Deal with the harness behind it and you can install the replacements. Make sure you put everything back in its place, by reversing the process detailed above and that should be it. This is all you need to do, if you wish to remove and replace the turn signal light assembly on your Toyota Camry, made in the year 1994.