DIY, change the front grille on your Volkswagen Jetta, produced between the years 1999 and 2004. You can make this replacement in order to obtain better access to the headlights or if the grille is damaged and you just want to replace it. You will require a flat blade screwdriver and about 15 minutes of your time, to do it. 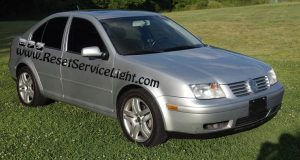 First, open the hood of the car and push the tab located on the middle of the grille, in order to release it. We marked its location with a red arrow in the image below. 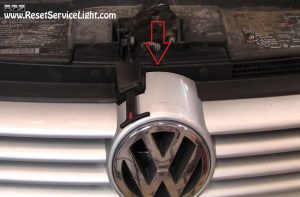 After that, go to the extremities of the grille where it has some retaining clips. Insert your fingers under these extremities and pull them up, to loosen the grille. After you do it, go to the hood latch and pry out the little clip shown below, using the flat blade screwdriver. You have to do it in order to release the front grille from the mechanism of the hood latch. 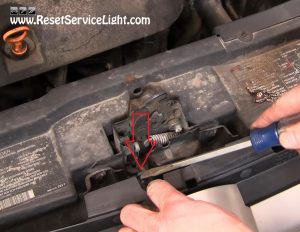 Now, with the grille detached from your car, you can work to install the new one. If you need some plastic parts from the old one (the VW emblem for example) you just have to look on the backside and work on the retaining clips holding every piece. Reinstall everything back, by reversing the whole process and thats it. These are the steps you have to follow, if you need to remove and replace the front grille on your Volkswagen Jetta, manufactured between the years 1999 and 2004.