Do it yourself, change the fog light assembly on your Ford Explorer Sport Trac, made between the years 2001 and 2005. This repair will require a Phillips screwdriver, a 7 mm wrench or socket wrench and about 15 minutes of your time. 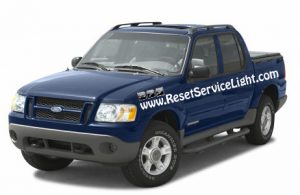 You can start by lifting up your car on a jack or elevator in order to get better access under the front of the car and especially behind the front bumper. There you will need to remove the three Phillips screws marked with red circles in the picture below, that hold a plastic cover, to reach the fog light. If you just need to service the bulb, removing the three screws is just enough to get your hand in there and twist the bulb counterclockwise. If you plan to replace the entire fog light assembly, it is better to detach the cover completely, by also removing the two plugs marked with blue circles. 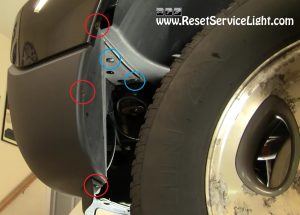 After you get rid of that cover, you will notice that the assembly is held by three 7 mm bolts, as you can see below. Remove them with the appropriate wrench or socket and detach the assembly. 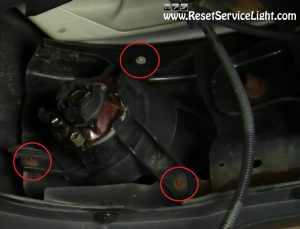 At this point, you can install the replacement. Insert the new part back into its place in the bumper and secure it with the bolts. Then, insert the bulb into its socket and place the plastic cover back with its retainers. These are the steps you need to follow, if you wish to change the fog light assembly on your Ford Explorer Sport Trac, produced between 2001 and 2005.