DIY, replace the EGR valve on your Honda Accord V6, the model made in the years 1995, 1996 and 1997. This repair will require a 12 mm socket wrench with an extension and most probably a razor blade or other tool to clean the gasket material off the engine. The whole process of replacement might take you about 30 minutes. 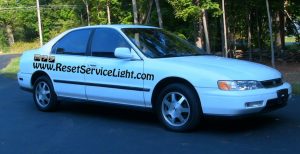 You can start by opening the hood of your car, and locating the EGR valve. It is on the right, upper side of the engine cover, as you can see in the picture below. 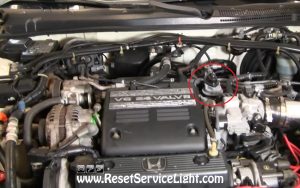 In order to remove the EGR from the engine, you will have to undo the two 12 mm nuts that secure it, marked with the red circles in the image below. We marked the electrical connector with the blue arrow, that can be unplugged by hand as well as a small air, vacuum hose, marked with the yellow arrow. 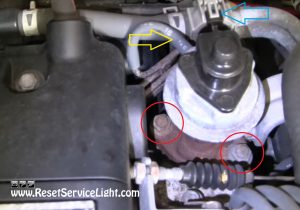 After you remove all the retainers, you can pull up the valve. Now, you will have to clean the mounting location on the engine because you might find gasket material there, or carbon deposits. Be very careful how you do it, though, because you have to keep anything from falling inside. After you clean it, you can lay a new gasket into that place and install the new EGR valve. Secure it with the two nuts, plug back the electrical connector and that small hose and that should be it. This is all you have to do, if you wish to replace the EGR valve on your Honda Accord V6, the model produced between the years 1995 and 1997.