DIY, replace the battery of your Ford Contour made between the years 1996 and 2000.  You can do this repair in about 15 minutes, using a simple 10 mm wrench or a socket of the same size. You should use a pair of protecting gloves when handling the old battery, because it can be corrosive and dangerous. 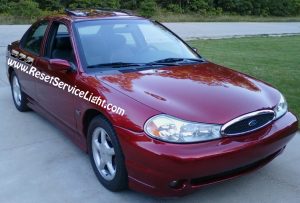 In the beginning, open the hood of your car and locate the negative terminal cable of the battery (indicated with the blue arrow in the next picture). 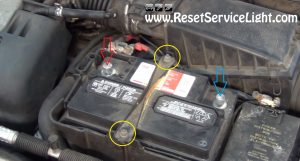 If your battery doesn’t look as in the picture, you can easily identify the negative cable if you look for the “minus” symbol on the battery and in most cases it is coloured in black. After you detach the negative terminal cable, make sure you remove the positive cable of the battery. It is marked with a “plus” symbol and it is usually coloured in red. Then, using the wrench, you should unscrew the two bolts holding the battery bracket (shown with yellow circles in the image above). Now, you can remove the old battery. We advise you to clean the battery container in order to remove possible acid or corrosion (as shown below). 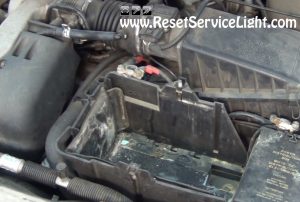 After you complete these steps you can install a compatible replacement. To finish the repair process, just reverse the instructions above. Tighten the bolts holding the battery bracket, connect the positive cable first and then the negative one and this is it. These are the steps you need to follow if you need to replace the battery on Ford Contour made between the years 1996 and 2000.