DIY, change the air filter on your Mercedes-Benz C300, made between the years 2008 and 2014. You will require a Phillips headed screw driver for this replacement and two new air filters. The whole process should not take you more than 15 minutes. 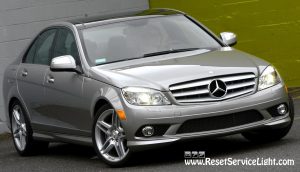 In the beginning, open the hood of your car and remove the front piece of the engine cover, marked in the picture below. You can do it very easily with your hands, by just pulling it upwards. 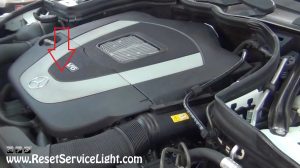 After you do it, you will notice the three air hoses marked with red arrows below. Using your hands once again, disconnect them from the air box (the upper engine cover). Then, pry out the clip marked with the blue arrow, that secures the engine cover and pull out firmly the cover to release it from its hooks. 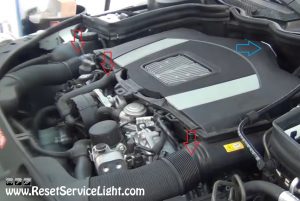 Now turn the engine cover upside down and, using the Phillips screw driver, remove the eight screws that secure the two filter compartments. Then remove the old air filters, clean the air boxes for dirt and install new and compatible filters. After you do it, seal back the air boxes with the eight screws, reinstall the main engine cover by pushing on it firmly and secure it with the clip. At the end, reconnect the air hoses and place back the front engine cover. This is all you need to know, if you wish to change by yourself the air filter on Mercedes-Benz C300, manufactured in the years 2008, 2009, 2010, 2011, 2012, 2013 and 2014.